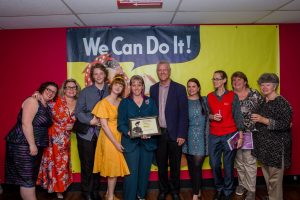 Queensland Centre for Domestic and Family Violence Research Officer, Terese Kingston, has been named the Services Union recipient of the Emma Miller Award for 2018, at a ceremony in Brisbane last Friday.

The Awards, coordinated by the Queensland Council of Unions, are named after pioneering Trade Union Organiser and Suffragist, Emma Miller.  They recognise the outstanding contributions made by women activists to their union each year.

Described as “a real change maker”, Terese is active in a variety of roles within the Mackay community.  Terese volunteers her time in union activities, committees and as an advocate for women in all that she does.  She particularly is passionate about ending domestic and family violence in the community.

Terese was honoured to receive the award, ““Emma Miller is an inspiring figure in both our union and women’s movement history, and I feel incredibly humbled by the company I find myself in with current and past awardees. No one gets an award like this on their own so I really want to thank all the strong feminist women who have supported, mentored and inspired me over the years”

Terese travelled to Brisbane to attend the Award Ceremony and was presented with the Award by Senator Claire Moore.